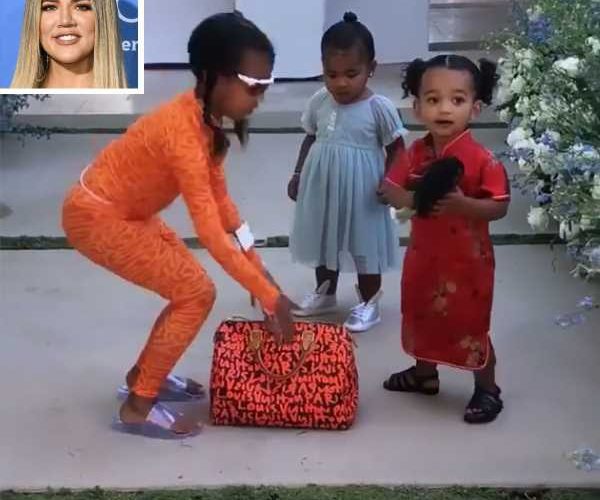 Khloé Kardashian shared an adorable clip on Saturday of her daughter True bonding with cousins North and Chicago while attending their great-grandmother MJ’s birthday party.

In the sweet social media posts, Kim Kardashian West’s eldest daughter North, 6, leads her 18-month-old sister Chicago over to the spot where True, 15 months, is standing.

Wearing a bold all-orange look, North proceeds to pull out a toy doll from her patterned designer handbag before giving it to her younger sister, who promptly starts to run off.

Another sweet clip appears to show True, who was wearing a sweet blue dress, gesturing towards her cousin North.

As the evening continued, the Keeping Up with the Kardashians star, 35, lavished plenty of attention to MJ, who will be turning 85 later this month.

“Celebrating MJ!! Celebrating 85 years of perfection,” she wrote on a sweet Instagram post, before documenting the sweet moment when the whole family sang her happy birthday.

Kardashian also went on to share a family portrait, which featured almost all of her sisters and their children.

In the photo, the Revenge Body host could be seen standing beside younger sister Kylie Jenner, who held her 17-month-old daughter Stormi in her arms.

Kardashian West was also present for the picture, standing next to her mother Kris Jenner as well as Kourtney Kardashian and her youngest son Reign. Meanwhile, Kourtney’s daughter Penelope stood in the front row with her BFF North, as Kendall Jenner leaned in to cozy up with her grandmother.

The sweet family outing comes shortly after True got to spend some quality time with her father, Tristan Thompson.

On Friday, the 28-year-old NBA star, shared a sweet photo on Instagram of True sitting in between her dad’s legs as they played together.

“Twins 🙏🏾😍🙌🏾,” Thompson captioned the shot, pointing out their striking resemblance.

Earlier this week, a fan had also noted how similar the father-daughter pair look.

“I know Khloé [Kardashian] hates Tristan, but Baby True [is] starting to look just like him,” they wrote alongside a side-by-side photo.

Kardashian went on to defend Thompson by saying she doesn’t hold any grudges, and could never “hate anyone who helped create such an angel.”

“People make mistakes, but I won’t hurt my own healing by holding on to hate,” she wrote, as captured by Comments by Celebs. I’m too busy raising my beautiful baby and securing that [money] to hate any individual. Sweet True has always looked like her daddy. She’s beautiful!!” she wrote.