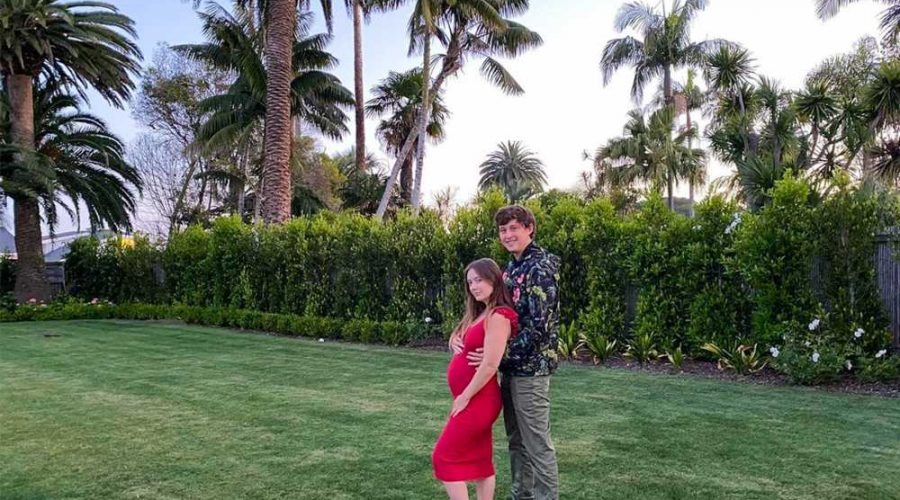 Billie Lourd is taking a walk down memory lane.

On Thursday, the 28-year-old actress shared a slideshow of photos that documented her pregnancy with son Kingston, now 2 months, captioning the shots, "💕✝️♓️🅰️♑️🎋🎏⛎👢💕 #throwback."

In one shot, Lourd's fiancé Austen Rydell can be seen cradling her baby bump as they stand on a green lawn surrounded by trees. Another picture features the Booksmart star posing with her father, Bryan Lourd, at what seems to be a baby shower.

The new mom also included a snap of Rydell, 28, carrying their newborn in a baby carrier during a sunset walk on the beach.

The photos are particularly special for fans to see as the couple kept their pregnancy private from all but those close to them.

Lourd surprised everyone when she first announced the birth of her son in September, sharing a photo of the little boy's feet on her Instagram.

As the grandson of the late Star Wars actress Carrie Fisher, the child was fittingly dressed in a solar system onesie for the birth announcement. He was also wrapped in a blue and white fuzzy blanket.

Lourd and Rydell got engaged in June. In his announcement of the happy news on Instagram, Rydell wrote that saying "yes" to his proposal was a no-brainer for the Scream Queens alum.

"💍💍💍She said YES!! (Actually she said 'Duhhh') But I guess that's even better than yes?!? 💗🤪🎉🎰💥🍾," he captioned a series of photos that encapsulated their romance.

Previously, the actor penned a sweet Valentine's Day tribute to his love.

"I found the best girl in the world," he wrote on his Instagram in February, posting a photo of the two sharing a kiss in front of the sunset. "Happy Valentines Day to us!! We're hangin with the redwoods today.💕 ❤️🔴🌲🌹🐿."

At the tine, Lourd also shared her loving post of her own, writing alongside a slideshow featuring the couple, "🌎💑🌏All 'round the world you make my world go 'round."

The couple, who first dated in early 2016 but later broke up, rekindled their romance in late 2017.