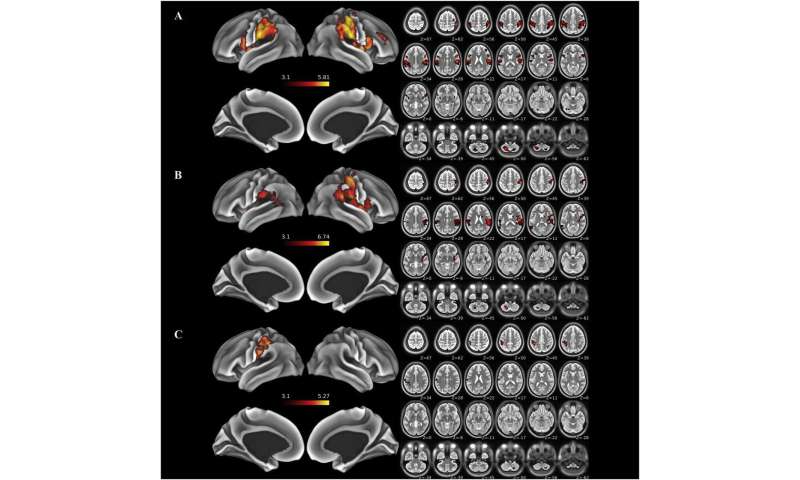 Fans of the blockbuster movie “Iron Man 3” might remember the characters step inside the digital projection of a “big brain” and watch as groups of neurons are “lit up” along the brain’s neural “map” in response to physical touch. Now, much like that scene, researchers at the University of Missouri have discovered a new insight into how the complex neural map of the human brain operates. Similar findings have been previously reported in animal studies, but this is one of the first studies where such a result has been documented in people.

“When a person touches something with their right hand, a specific ‘hand area’ in the left side of the brain lights up,” said Scott Frey, the Miller Family Chair in Cognitive Neuroscience in the Department of Psychological Sciences. “A similar, but opposite reaction happens with the left hand. But when someone loses a hand, we found both ‘hand areas’ of the brain—left and right—become dedicated to the remaining healthy hand. This is a striking example of functional reorganization or the plasticity of the human brain.”

Researchers used functional MRI (fMRI) at the MU Brain Imaging Center to scan the brains of 48 people—19 of whom had lost a hand. They created a computer-controlled, air-based system to deliver light touch to the hands and face. Functional MRI scans are similar to traditional MRI scans but are sensitive to tiny changes in blood oxygenation levels in the brain that occur when areas of the brain are processing information. The researchers saw in their scans that when the brain is deprived of input from a lost hand, it reorganizes its neural map and reroutes those functions to the remaining hand.

Frey said this discovery could help scientists and medical professionals better understand the underlying mechanisms behind the brain’s plasticity—the ability for the brain to adapt to changing conditions—when a traumatic bodily injury occurs, such as with veterans returning from injury on the military battlefield.

“We can think of the areas of the brain that process sensations from our bodies as being organized like a map with separate territories devoted to specific body regions such as the hands, face, or feet,” said Frey, who is also the director of the Rehabilitation Neuroscience Laboratory at MU, a joint venture between the MU College of Arts and Science and the MU School of Medicine. “We have long known that injuries such amputation or spinal cord damage change the organization of this map. If you lose a hand, for instance, then the associated ‘hand area’ may be partially taken over by neighboring functions in the map involved in processing sensations of the arm or face. This is a form of ‘brain plasticity.’ This work demonstrates that such plasticity also occurs across great distances between the left and right hemispheres of the brain.”

Related posts:
05/11/2019 Health Problems Comments Off on Researchers find human brain can rewire itself after a traumatic bodily injury
Categories
Recent Posts
We and our partners use cookies on this site to improve our service, perform analytics, personalize advertising, measure advertising performance, and remember website preferences.Ok